Hi folks. I write to you after, lo, these many months with two pieces of news and some recommendations.

On December 13, my digital book America’s Public Bible: A Commentary will be published online by Stanford University Press. The book will be a part of Stanford’s digital publishing program, which publishes interactive works of scholarship.

More on the book in the lead up to publication. In the meantime, you might like to check out the prototype version, because it is not long for this world.

Here is the cover: 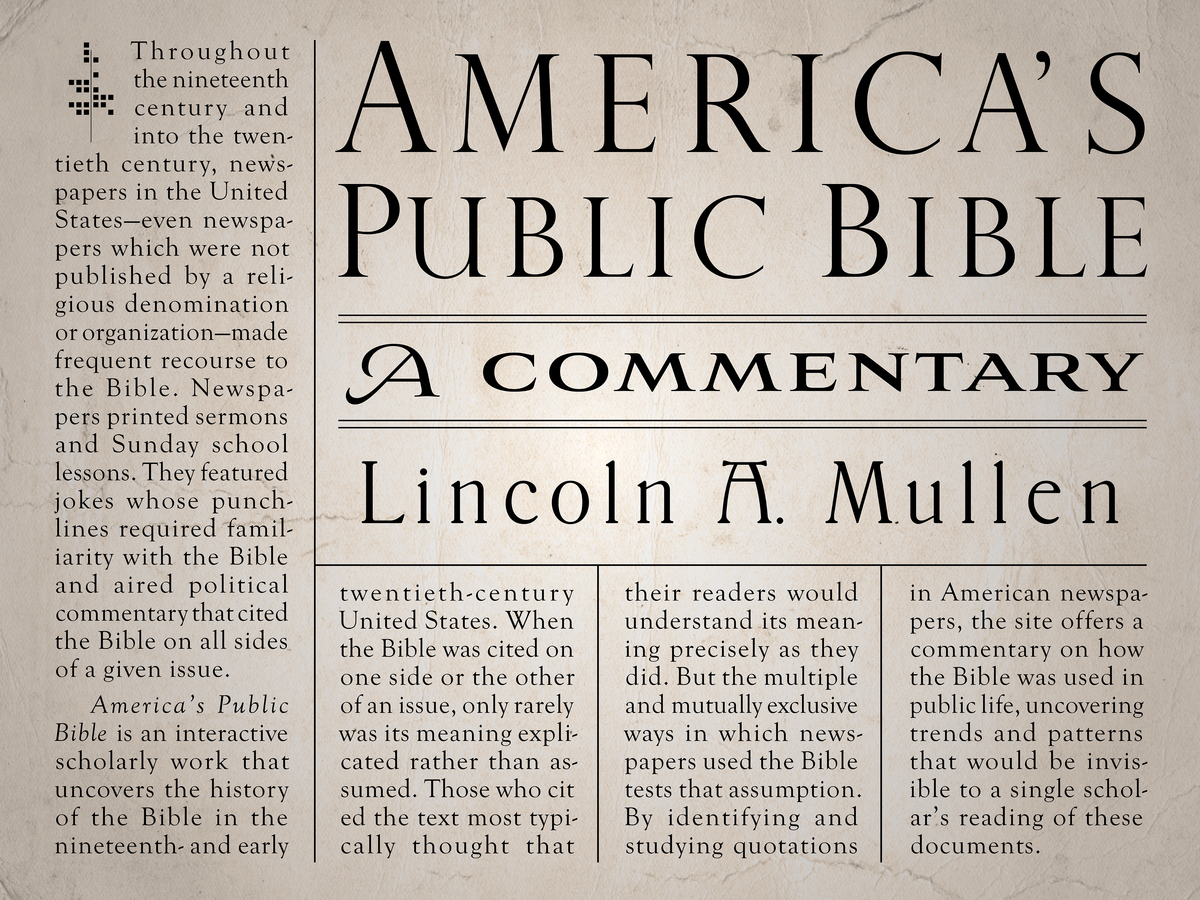 And here is the publisher’s description:

Throughout the nineteenth century and into the twentieth century, newspapers in the United States—even newspapers which were not published by a religious denomination or organization—made frequent recourse to the Bible. Newspapers printed sermons and Sunday school lessons. They featured jokes whose punchlines required familiarity with the Bible and aired political commentary that cited the Bible on all sides of a given issue.

America’s Public Bible is an interactive scholarly work that uncovers the history of the Bible in the nineteenth- and early twentieth-century United States. When the Bible was cited on one side or the other of an issue, only rarely was its meaning explicated rather than assumed. Those who cited the text most typically thought that their readers would understand its meaning precisely as they did. But the multiple and mutually exclusive ways in which newspapers used the Bible tests that assumption. By identifying and studying quotations in American newspapers, the site offers a commentary on how the Bible was used in public life, uncovering trends and patterns that would be invisible to a single scholar’s reading of these documents.

A year ago, my colleague and collaborator John Turner and I were trying to decide what to work on next. We were thinking about doing a podcast, because RRCHNM was in the midst of standing up R2 Studios. And we wanted to do a project that would not just be of scholarly interest, but also would uncover the history of some topic important to American life.

After a lot of effort to get this off the ground, we are grateful that the Henry Luce Foundation has funded our efforts to create a podcast on the history of American antisemitism. In episodes that take listeners from the eighteenth to the twenty-first century, the team will unpack instances or aspects of antisemitism in U.S. history through narration, primary sources, and expert interviews. These stories will discuss what antisemitism is and how it developed and persisted alongside other forms of bigotry and hatred in the United States. Each episode will relate to the project’s broad themes: that antisemitism is a deep-rooted American problem, that it spans the political and religious spectrum of the United States, that it is intertwined with the history of race in America, and that knowledge and understanding of the history of American antisemitism makes it easier to identify and oppose it in the present.

I’m not going to talk much—if at all—about the podcast before it is released, because I’ve learned that nothing kills my enthusiasm for working on a project like oversharing it before it is done. We are still looking for additional funders for the podcast, and the show doesn’t have a title yet.

But we had a “podcast summit” at my house this past week to kick off our collaboration. And—wow—have we assembled a great team. Our colleagues Jeanette Patrick (who is a co-PI on the grant) and Jim Ambuske are the producers on the podcast. Zev Eleff is leading our advisory board. Mark Oppenheimer will be the podcast host. And we are close to concluding a partnership with a leading historian in the field to research and write the project.

Two related recommendations. For listening, check out Gatecrashers, a podcast from Mark Oppenheimer and Tablet magazine about “the hidden history of Jews and the Ivy League.” For reading, check out Britt Tevis’s article “Trends in the Study of Antisemitism in United States History” in American Jewish History.

Raking: Leaves. My children are hiding in the giant pile of leaves in the corner of the yard. #15: A commentary on how Americans have used the Bible #13: Newsletters all the way down